Oh, how we have missed this world.  A world of mystics, wonders, and naughtiness.  A world of swords, of fights, of weapons, of Miami in all its beautiful and deadly glory.  A world of hair jokes, ferrets, kidnaping demons, presents, and students.  And yes, a world of hair pins, hair traumas, and hair desires. 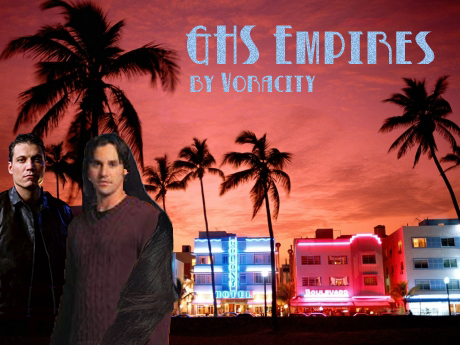 This is a spin-off of Dark GHS.  It starts after the Winchesters come over.  After the dogs are gone, but before they rescue Harry.  Before the Winchesters move out.  Reading the Original and/or the Dark GHS series might help you understand this universe if you're unfamiliar.  Also, we have a few new fandoms showing up to play with the boys and the hair.  The few, the proud, the Losers, and a few others here and there.

02:  Starting Over.  Two new people appear in Miami that had been dead.  One a minion, the other a former teammate.  This is going to complicate things a lot.

03:  Putting The Bad In Badass.  Getting used to the team and Wade's contributions to Miami and the insane lives they lead.  Including Xander being taken hostage by a demented former general. Rated R at least for the battle.

04:  Leave Time.  Jensen and Xander end up at the same club so Jensen takes some time to get to know his new teacher.

05:  Surprises.  Sometimes, everything is connected somehow.

06:  From Fluffy to Badass in Point-Two Seconds.  A new player comes to town that isn't really what he says he is.  Of course, he's also known by the name Trouble.

09:  Relations.  Jensen's sister and niece finally get to talk to him.  So does a terrorist.  Thankfully, Xander and Wade can handle them.

10:  More Jensens in Miami.  Moving day for the family after his niece earns the right to be spoiled by Jensen.

11:  Poker Buddies Cause Interesting Issues.  Sometimes the poker buddies are naughty, sometimes they want Xander to be naughty instead.  Depends on the mood in Miami.

12:  Dangerous Times. A hurricane and an apocalypse, yay!  Plus the guys get to meet the girls.  Rated R for some fighting and smutty thoughts.

13:  Rumors.   Xander has to talk to some people outside of Miami to get some thoughts flowing in others.

14:  Moving Your Body.  The guys need new ways of learning how to move.  Xander finds some and it's very hot.  He also takes them on their first ride, which leads to the kids discovering the hoofed visitor from another realm.  Though it comes with a complication of a bad thing happening to Danny, Don, and a few others.  Bit angsty near the end.

15:  Prelude to Problems.  Someone has an interesting proposition for Xander and some higher ups are spotting the start of an issue.

16:  Fucking With Xander Makes Him Mad.  Someone is going to be destroyed for this level of screwing with the family, even if the other members do want to do the destruction this time. NC-17

17:  Hidden Things.  The family's still helping.  Xander's still got plans.  Including some older plans that are coming to light.  NC-17

18:  Did You Miss Me?  Someone is trying really hard to destroy Xander and an innocent life he's protecting.  Pity for them, Xander's not happy with that idea.

19:  The Other Side of Prep Work.  The main guards prep the team for the upcoming convention.  At the same time, a few unwelcome people show up in Miami so some higher ups have to learn about immortals.  Though they won't need the info for long.  Poor Horatio's nerves.

20:  Prepping for Diversions.  Steve talks to some semi-relative poker buddies to prep Cascade for the upcoming GHS convention.  Xander gets really bored and goes to Disney with Wade and Anya.  Pure torture.  What fun.

21:  It's All About the Plans.  The tumor is still growing.  Anya has a growing problem as well, one that doesn't make many very happy, especially Wade.

22:  The Adopter.  The best adoption service monitor ever, Xander.

23:  Backing Up Ideas.   Some future plans are being shown off after another plot to get mass ownership of GHS members.  A new crossover appears but probably only for this part.

24:  A Bit of Strange Normality.   Blair's taking refuge from Jim, helping Xander.  He gets to be sucked into some of the strange stuff while Xander helps the normal strange things, though he does have to stop an attack of rabid people who hate his baby dragon.

25:  New, Non-Spoilable Pets  Horatio goes to ask a few questions of the poker circuit while Xander has to liaison with the team near the newest emergency plan's house.  Plus a few new pets appear.

26:  Refuges for Refugees.  Some people with bad ideas try to make Xander pissed off and it works a bit too well.  So they head to Denver and start talking about relationship things among the family group.

27:  Future Needs Being Planned.  To date or not to date, that is a sticky question.

28:  Tripping Plans.  Why isn't there a traveling society among GHS?

29:  Interruptions.  The trip's planning is going along well.  Even though someone has sold GHS to the mafia.

30  With Or Without Xander, Miami Still Has Its Moments.  The trip starts off well, and in Miami things are a bit Xander-normal.

31  Making Soothing Plans.  We have some soothing plans from the Winchesters for Xander and Wade the monkey becomes very helpful.

32  Fixing An Intentional Oops.  It's always fun watching people get confused by presents to Xander.  Or when Xander has to act because someone attacks the family.

33   Problems In Japan  Some problems happen while the tour is in Japan.  One huge one happens just after they leave too.  Notes:  covers the earthquake and tsunami that happened to Japan.

*34  Communication Needed.  The Russian and Turkish part of the world tour both get a few minor complications and Xander has to rush off to save some friends from a torturing arms dealer in Hawaii.

*35  Issues of Issues.  There's some issues while traveling.  Namely the 'escorts' aren't doing as much as they need to.